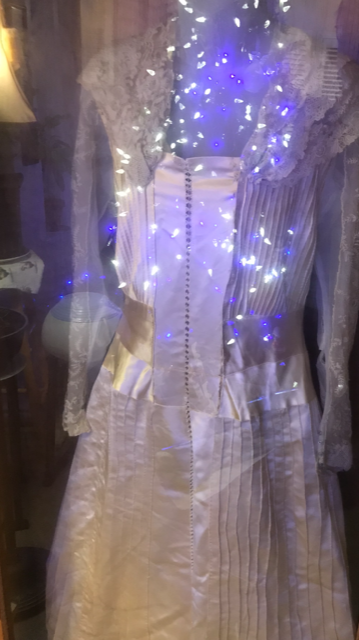 A Christmas story
Sharing the story of my grandmother's wedding dress ... 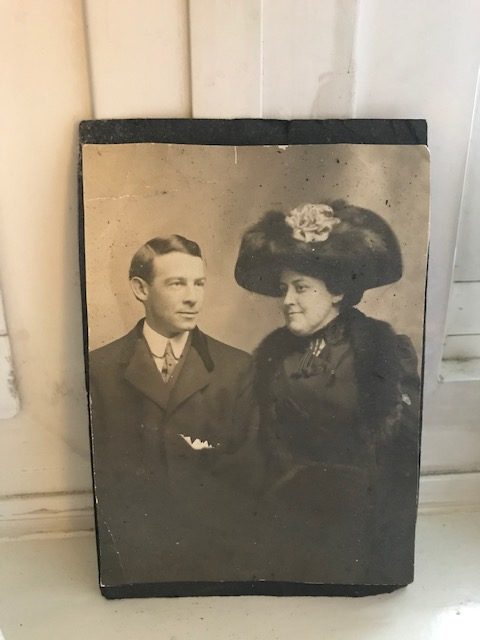 This  Christmas story begins with a message from my maternal grandmother when I was attending a mediumship workshop. (Thank you, Intuitive Mind ) She came in to say that her wedding day had been the most wonderful day of her life.  She asked me to honour her wedding dress in some way. At the time, it was wrapped carefully in a box in the garage.

I asked both of our daughters if they wanted to wear it, and as they said no, then the way was clear for me. I had it put in a shadow box! It faced the Christmas tree, which was decorated with coloured tinsel.

Backtrack to my grandparents, Clara and Alexander ,  pictured on the left. They were  very happy. She wore a beautiful custom -made  dress , probably from New York . ( I found this out because I took it to our  local museum.) They were married in the state of New York in 1909; the dress is currently one hundred and twelve years old.

Unfortunately , I never met either of them because my grandmother died , along with the other twin. ( a boy named after his grandfather Frederick )  As it was 1913, her father gave her to her aunt and uncle to be raised. My mother saw him only once, years later, with a son, her step brother . My grandfather has disappeared into the mists of time, dying in 1936.

So the years passed and the dress was worn by my mother in the early forties  ( I have included their picture ) and then by me in the early eighties. It was lovingly placed in the shadow box.

Very shortly after that, I was in the kitchen and I heard a tremendous crash!! The box had fallen forward; it now had bits of tinsel inside and the sleeve was slightly askew. When I told the carpenter, he was astonished that this had happened. He reinforced it, still shaking his head.

It took me months to figure out that this crash was no accident. It was a clear message from the ancestors. They were happy I had honoured their wishes!

I also include the news article about their wedding and it was published on Christmas day in 1909. A Christmas wedding!!!

This Christmas you can honour your ancestors, by lighting a candle or setting out a place for them at the table.

Deep Peace to you this year and always!!! 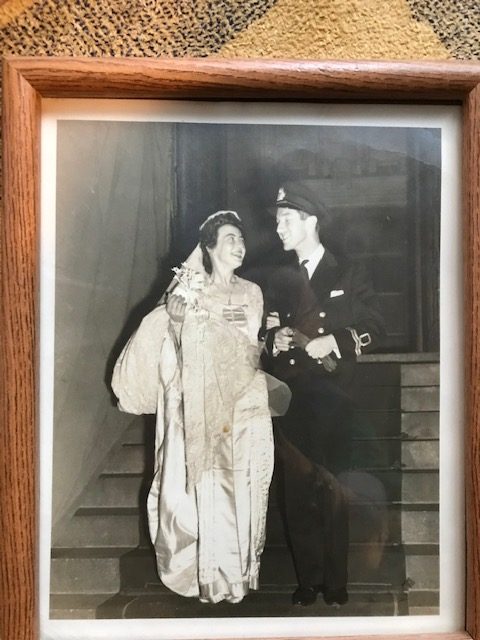 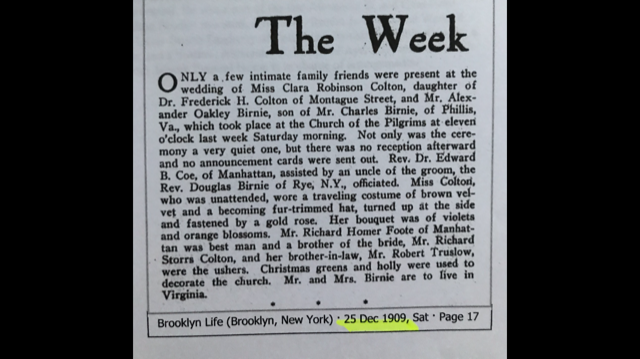 In 1909, my grandmother carried orange blossoms and violets. When I look at the dress, no matter what time of year it is , I am reassured; I am so grateful for this experience!!! We are loved. We are not alone. .Thank you, Spirit.